Understand the impact of political contributions and donations.

SEC Rule 206(4)-5, commonly known as the pay-to-play rule, along with FINRA Rule 2030 and FINRA Rule 4580, limits campaign contributions by organizations and individuals that do business with or lobby the government, with the intent of preventing firms from making donations to influence future business. Firms are also beholden to state and local regulations in the jurisdictions where they operate.

The contentious political climate of today has seen unprecedented levels of political donations. Firms must anticipate that regulators will be keeping a close eye on the political contributions of both the organization and their employees. And based on past patterns of regulatory enforcement, pay-to-play compliance needs to be a priority on an ongoing basis—not just during key election years.

Pay-to-play compliance is a concern for firms of all sizes. Firms need policies and procedures in place to monitor employee contributions to identify potential conflicts of interest and avoid the fines, loss of fees and reputational damage that those conflicts can bring.

Are individuals aware of the rules that they must follow?

SEC Rule 206(4)-5 prohibits investment advisers from making political contributions with the intent of gaining or retaining contracts with government entities, and from providing advisory services for compensation to a government client for two years after the adviser or certain employees make a contribution to elected officials or candidates.

FINRA Rule 4580 outlines books and record requirements for government distribution and solicitation activities: “A covered member that engages in distribution or solicitation activities with a government entity on behalf of any investment adviser that provides or is seeking to provide investment advisory services to such government entity shall maintain books and records that pertain to Rule 2030.”

Covered employees are allowed to donate $350 to candidates for whom they may vote in an election, and $150 to other candidates. As defined by the SEC, a covered associate includes “any general partner, managing member or executive officer, or other individual with a similar status or function, any employee who solicits a government entity for the investment adviser and any person who supervises, directly or indirectly, such employee.”

Even an inadvertent infraction, or a donation just over the de minimis contribution limit leaves a firm subject to enforcement. If the rule is triggered, firms are faced with a cooling-off period during which the effects of a political contribution can be expected to fade, leading to potential lost revenue from uncollected fees. In order to prevent individuals from trying to exert influence indirectly, donations from other entities, including household members, are also covered under the rule.

Firms are subject to a “look back” provision. When an employee becomes a covered associate under SEC Rule 206(4)-5 and FINRA Rules 2030 and 4580, either through a role change or new hire, the firm must look back two years prior to determine if a political contribution was made during that timeframe.

Watch the Webinar Pay-to-Play Compliance: The 2020 Election and Beyond

Sonia R. Gioseffi from K&L Gates provides an overview of what you need to know to understand and manage pay-to-play compliance and other compliance concerns with respect to public pension plans, including SEC Rule 206(4)-5 and other rules, enforcement implications, gifts and entertainment, potential lobbyist registration requirements and strategies for addressing these risk areas.

“What is the definition of who an official is? So an official is any individual who at the time of the contribution was a candidate, whether or not successful. So that's an important caveat, which is that person doesn't have to win if they run for office or this individual holds office of a government entity. If the office is responsible for, can influence the hiring of an investment advisor by a government entity and this could be either that individual sits on the board or say as the chief investment officer of a pension plan or the more likely situation is that individual would have the ability to appoint someone to the board or potentially, you know, is involved with the selection process of who's running the plan. We also received a question here about who would be a government entity, which is, you know, clearly would be a public pension fund.

However, there are a lot of issues where it's hard to figure out who is a government entity and there's quasi-government entities. It does not include, for example, a private sector business. So say the pension plan for IBM would not be covered by this role a university. It could be there are public and private universities. So at a public university, there's things to think about, you know, is what about their, they may have a pension plan, they may have endowments, they may have foundations, which it's going to depend on how they're structured. So every university can be structured differently. And so it's, you know, it's important just to do the analysis on that. We also received a question about whether unions would be covered. I have yet to see a union that would be covered by this rule.

Clearly, you know say like a nurses union would not be covered because that's would be private-sector employees generally. But potentially it could cover you know, police officer or a firefighter union. Like I said, I haven't seen this be deemed a government entity, but my gut tells me that there could be a situation out there where it would be. So the important analysis would be to look at who is on the board of whatever entity you're looking at and determine you know, how did they get to that board and, you know, who was appointing them? And that can kind of help connect the dots as to whether or not it, the anybody on that board be covered or that pension plan or whatever entity you're looking at would be covered by this role. So going on to the next slide, which would be just, you know, additional information about the rule first is that a payment to a PAC or political party it could potentially be treated as a political contribution made directly to an official and therefore covered by the rule.”

Does the firm have a system to monitor donations and mitigate potential risk?

Compliance teams need access to comprehensive political donation data, solid recordkeeping systems in place to satisfy regulatory requirements and must be able to flag prohibited contributions before they are even made.

Webinar - Pay-to-Play Compliance: The 2020 Election and Beyond 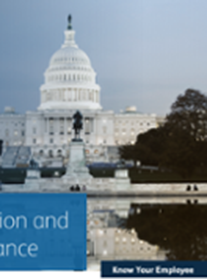 Fighting Conflicts with a Centralized Solution

Beyond the Headlines: Crypto and Digital Asset Compliance